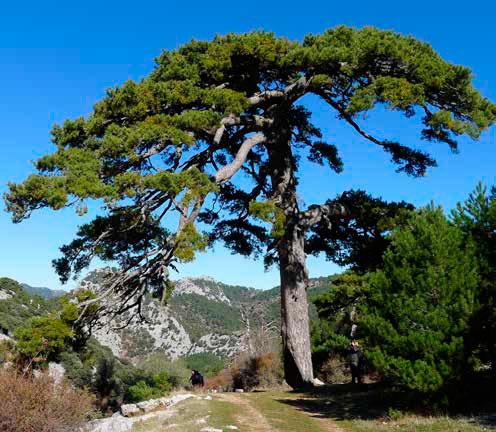 The path to informality

In the autumn of this year we had the opportunity to restyle this nurserygrown Savin juniper, Juniperus sabina, I previously worked on in a demonstration in the early nineties (pictured with Miguel Angel Garcia Gil founder of the Museum of Bonsai Marbella), with the students from my school in Spain. The current museum director, Rodrigo Garcia, son of the founder, has accepted the challenge of working on this old bonsai in the formal upright style. The idea was inspired by an old tree, solitary and vigorous, that has faced many centuries, struggling, and now the top begins to sag and twist: it is a tree that is transforming into informality, but still most of the trunk is erect and monumental. The example in nature is an old pine tree 20 meters tall growing in the same condition: a tree that is difficult to classify, a cutting-edge bonsai that marries art and nature. The old trees are our teachers.

the inspiration for restyling.

Miguel Angel Gracia
Gil, founder of the Museum of
Bonsai Marbella pictured with
the tree after its first styling in
the early nineties.

The tree has grown
vigorously over the last 20
years.

The uniqueness of this bonsai, its astonishing form, lies precisely in this: it tells the story of the life of the tree. A solitary tree that rises up, spreading its branches as if they were arms, to embrace the fresh breeze. The shape is broad, not too compact or twisted like a moyogi, very large, virile, fighting for its life: it is majestic.

Many
drawings were created by
the team to fully evaluate the
potential for the restyling.

Its most expressive value is the twist at the top, where the wind blows to and fro, but it looks like the tree does not submit and one part is dead, a large tenjin soars and the top begins to bend: the seems movement is not caused by the wind, but by an internal dynamic.

It is a lonely tree, a large singularity that towers above its smaller companions, where the solid and monumental trunk begins to twist, shaped by powerful forces, supreme in its height and its vast volume. Starting from the nebari, the elevation is dramatic in all its aspects: the trunk is marked by shari, a robust lower branch has become a jin and the naked rounded crown almost covers the entire sky. A heroic tree, where the drama is in the tree itself, in conflict with its form reacting against the wind; in this colossal aspect lies its profound grace and subtlety. The whole nature of the subject makes it very contemporary in appearance, it does not need much explanation because it has the nature of the tree where aging another twenty years will make it a fine specimen.

Its apparent age rises above all the values of the Japanese aesthetic, Shibusa, embodying simple, subtle, rustic and unobtrusive beauty. The irregular and rough texture of an old, magnificent bonsai, is an example of how the idea of rustic is not vulgar or coarse, but is refined because it is an expression of a love for nature. A bonsai that possesses this character will truly be Shibui, a refinement that gives spiritual joy of “restrained spontaneity.”

The foliage is removed from branches in preparation for the work on the ten-jin.

Using hand tools and power tools, the jin and shari are refined.

Work continues on the shari and ten-jin.

the styling
team working with
deep concentration and
cooperation slowly improves
all the elements that will
redefine this tree’s style from
formal to informal through
carving, pruning, wiring and
treating the deadwood with
lime sulphur.

The current director
of the Museum of Bonsai
Marbella, who accepted
the challenge to restyle this
juniper is Rodrigo Gracia, the
son of founder Miguel Angel
Gracia Gil.

The result of the
restyling, a formal composition
is now an informal tree
that has a powerful story of
survival to tell.

The tree was repotted
six weeks later and now looks
very comfortable in its new
container.

It is a lonely tree, a large singularity that towers above its smaller companions, where the solid and monumental trunk begins to twist, shaped by powerful forces, supreme in its height and its vast volume.